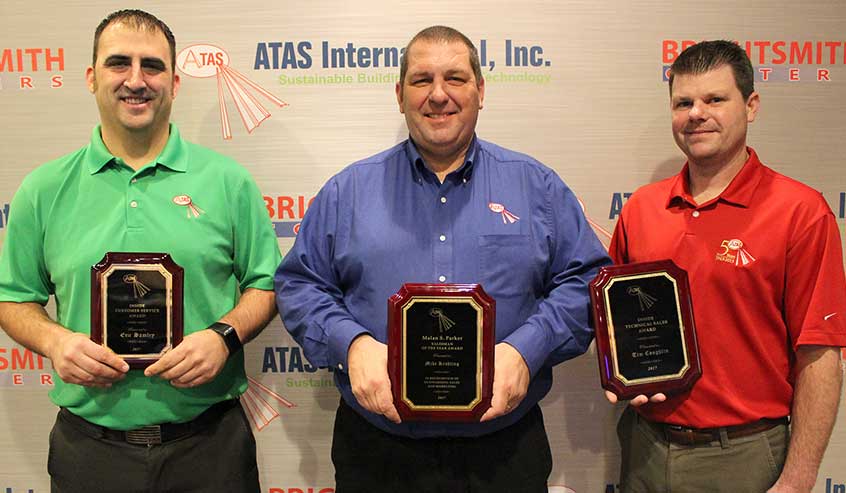 ATAS International, Inc. is pleased to announce Mike Krahling, CSI, CDT, Eric Samley, and Tim Coughlan,  as the recipients of its annual Malan S. Parker Award to recognize the top sales team of 2017.  Malan S. “Steve” Parker was an ATAS employee in the New England territory, and he passed away in 2002.  Since then, to honor his hard work and dedication to ATAS, the sales team of the year award is now known as the Malan S. Parker Award.

Krahling is the ATAS Product Representative for Eastern Pennsylvania.  Samley and Coughlan are Inside Technical Salespeople, and both served that territory for a period of time in 2017.  They were chosen for their overall sales growth within the territory, and observance of corporate goals and objectives.

Education of customers is a key component to building a successful territory, and Krahling has been very involved in teaching architects, contractors, distributors, and others, about how metal components and systems can contribute to a project.  As well, he is often selected to help train new Product Representatives when they join ATAS, due to his vast knowledge; not only of products and services, but of the design, construction, and sales processes.  Krahling and Samley have received this award previously, in 2015.

Krahling is on the board of directors for the Construction Specifications Institute (CSI) Central Pennsylvania, North Central Pennsylvania, and Philadelphia chapters, and is also active in the Greater Lehigh Valley chapter.  In 2014, he earned CSI’s Construction Documents Technologist (CDT) certificate, to enhance his knowledge of the processes and documents utilized in the design and construction of commercial buildings.  Krahling has held the position of Product Representative with ATAS since January of 2013, and prior to that, was employed at ATAS from 1990 to 1999.  Beginning in the position of Inside Technical Salesperson, he advanced to the position of Traffic Coordinator, and then to Production Manager during his first tenure with ATAS.  Due to varied roles in the industry for the past 25 years, he has built a knowledge and contact base that has been of great benefit to him and his customers.

“Mike, Eric, and Tim have built a loyal customer base through their hard work and dedication, and their performance proves just that”, said Mark Bus, National Sales Manager for ATAS.  “Mike is also very instrumental in driving the benefits of ATAS and metal throughout the industry, especially within the architectural community. This award exemplifies all their dedication to their company, customers, and peers. We congratulate them for their accomplishments and thank them for their continued service to ATAS.”