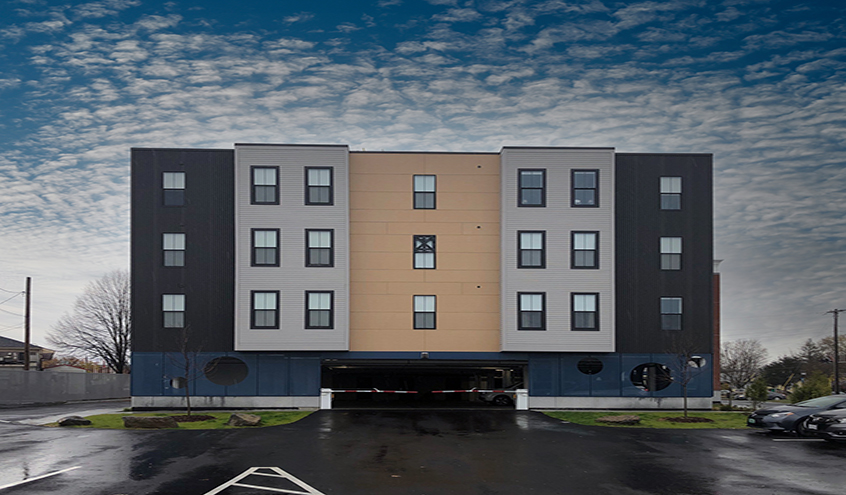 The parking garage at 3 Maple in Essex Junction, VT won the first-place award in the accents category in ATAS International’s 2021 project of the year competition.  Custom perforated panels in Regal Blue .125 aluminum were installed on this building.

Warren Irish of G4 Design Studios, architects for his project, said, “Chittenden Crossing, located in Essex Junction, Vermont, is a 4-story mixed-use residential and commercial building. The property is located on a busy intersection in Essex Junction called Five Corners which is known for its early 1900’s historic aesthetic, inspiring the design for the front façade of our building. We wanted to add a contemporary flair to the rear of Chittenden Crossing and thought that ATAS panels achieved our vision for the building.  Bobby Harriman of G4 worked closely with ATAS for the unique design of the panels surrounding the parking level.”

Irish further elaborates on the project’s design, “Perforated metal panels at the parking level serve as a screen for vehicles while also letting in natural light and ventilation for the space. The color and transparency of the metal screen was inspired by the deep blue of nearby Lake Champlain and is one of the mascot colors of Essex High School. To minimize the building mass and further the ambiance of Lake Champlain, large circular openings were cut into the panels varying in diameter and location so they could look like bubbles rising to the top of the garage. The final result helped to give the contemporary rear facade of Chittenden Crossing ties with its community and a safe place to park and enter the building.  There was a great deal of coordination between G4 Design Studios and the ATAS engineers to develop a structural system to support these panels featuring Bobby’s circular cut-out design. We also incorporated corrugated metal panels and light simulated wood which helped to contrast other materials like brick and fiber cement siding. This helped to elevate the classical elements of the building similar to a 1900’s block renovated into the 21st century.”

Matthew LaBounty of ABC Supply added, “The custom panels were something that the ATAS engineers designed. We were trying to get a metal panel to use for the look. There is a parking garage behind the panels, so we needed it to have plenty of ventilation while still being appealing to look at.  The dark blue color was to imitate the look of water and the holes were meant to look like bubbles sort of floating around.  It came out spectacular that is for sure; a lot of the credit should be given to the installers for the project, Bruso Contracting.”

The architect for the project was G4 Design Studios of Burlington, VT and the general contractor was BlackRock Construction of South Burlington, VT.  The custom perforated metal wall panels, installed by Bruso Contracting of Fairfax, VT, were purchased through ABC Supply Company of Williston, VT. 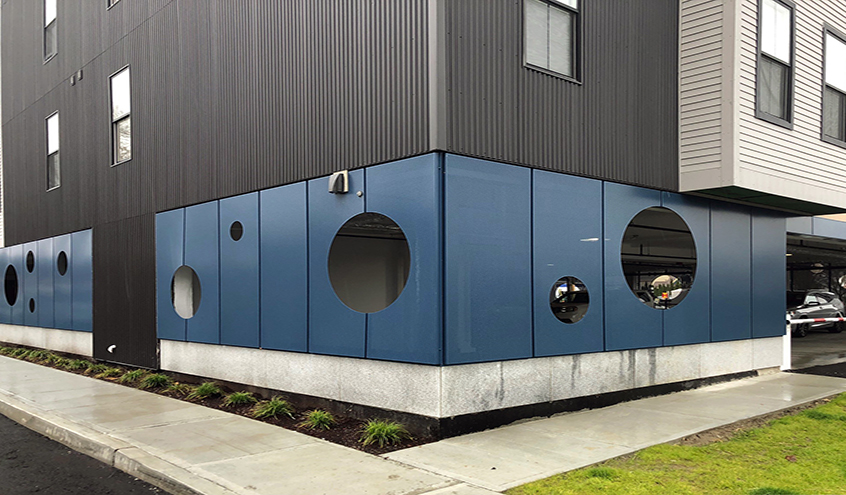