ATAS International has named Joe Jackowski, CSI, and Brian Silvius as the recipients of the annual Malan S. Parker Award, which recognizes the top sales team each year.  Malan S. “Steve” Parker was an exemplary ATAS product representative in the New England territory, and he passed away in 2002.  Since then, to honor his hard work and dedication to ATAS, the sales team of the year award is now known as the Malan S. Parker Award.

Jackowski is the product representative for Metro and Long Island, New York, and it’s the first year that he has won this award.

He has been with ATAS for almost five years, and prior to that, he spent 11 years in sales positions within distribution.  He also spent 15 years installing roofing and siding earlier in his career.  Jackowski is certified in metal roof installation from the Metal Construction Association (MCA), is a member of the Construction Specifications Institute (CSI), and recently became a member of the International Institute of Building Enclosure Consultants (IIBEC).

Silvius is the inside technical salesperson for the territory.  He joined ATAS over nine years ago, and this is the second time he has received this award.  Silvius is also certified in metal roof installation from the Metal Construction Association (MCA).

Jackowski and Silvius were chosen as this year’s winners for their teamwork in overall sales growth and observance of corporate goals and objectives. They obtained the highest level of sales in a year for the Long Island New York territory, substantially grew overall material shipped from the previous year, and increased sales in all market segments of their area.  Silvius’ support of Jackowski and their customers within the region was instrumental to the growth realized in that area.

“Joe and Brian had exceptional sales growth last year throughout the supply chain challenges,” said Mark Bus, National Sales Manager for ATAS.  “A lot of their hard work and discipline over the past several years came to fruition last year. Through their awesome partnership, they have built a loyal customer base. We typically have good success in Long Island, but through their efforts, 2021 was an exceptional year in all market segments of that territory. We congratulate both on this well-deserved award and for their dedication and continued service to ATAS. We appreciate our customer base that assisted in achieving their great year.” 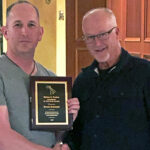 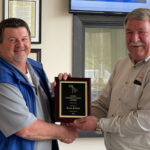